The Doag O'otham of Durango, Mexico 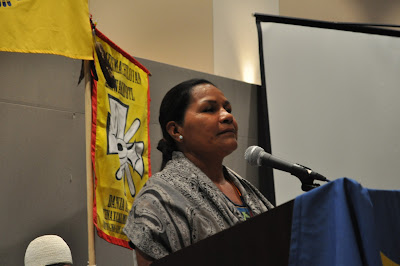 She had travelled over a thousand miles and bridged a thousand years of history, but when Vicky Flores Flores arrived at ASU West last week to participate in the DISMANTLING the Doctrine of Discovery International Conference, she was returning for the third time to visit her relatives among the O’otham Nations.  She came from the traditional O’dam Community of Santa Maria Ocotan in the State of Durango, Mexico which lies along the Eastern flank of the Sierra Madre Occidental mountain range in the heart of Mexico.  Her people, also known as the Tepehuano, consist of some 26,000 O’dam peoples distributed in 2 municipalities and 6 communities that cover one of the largest land bases of Indigenous Peoples south of the US-Mexico border.  A majority of the O’dam of Durango are still fluent in the language.  Santa Maria Ocotan lies at about 9,000 feet elevation among the mountain pine forests of the Sierra Madre Occidental.


I first met Vicky in Mexico City at a continental Indigenous Summit in 2010, where I was doing media work, recording interviews of the different delegates from across the hemisphere that were attending.  When I asked her for an interview she graciously agreed and it became very clear to me very quickly that this was a special opportunity.  In beginning the interview when I asked Vicky to introduce herself, she stated she was “O’dam”.  We were conversing in Spanish but I then told her that I lived in Arizona which was the homeland of the O’otham nations, and shared a few O’odham words that I had picked up from talking with Shannon Rivers of the Gila River Akimel O’otham.  The rest is not only history, but perhaps at the end of the day her travels to the O’otham Jeved here in the north may become the fulfillment of prophecy.


It was in 1990, in Quito Ecuador that the First Continental

Encounter of Indigenous Nations, Pueblos, and Organizations convened for the first time after nearly 500 years of colonization and genocide.  We gathered in Quito over twenty years ago to reaffirm our self-determination as Nations and Pueblos of Indigenous Peoples of the continent, and made commitments to each other as survivors of the greatest holocaust ever committed upon humanity to organize ourselves together under the principles of the Continental Confederation of the Eagle and the Condor.   According to traditional histories, this ancient continental confederacy was the original United Nations of the hemisphere, and extended from pole to pole and coast to coast across our entire continent of Abya Yala [the Americas].  The Eagle represents the symbol of the Indigenous Nations of the North and the power of “Sees Far”, while the Condor represents the Indigenous Nations of the South and the power of “Sees Within.”


At that gathering in 1990 in Quito, it was revealed that along with the tradition and memory of the Eagle and the Condor came a legend of the Prophecy of the Reuniting of the Eagle and Condor in a process of healing from the violence and trauma of centuries of colonization. 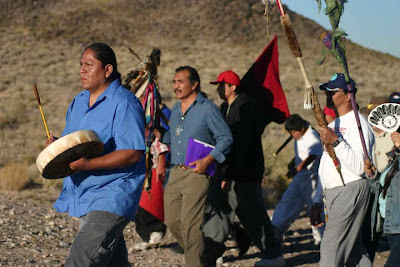 The two-day international conference on DISMANTLING the Doctrine of Discovery held at ASU West last week was a continuation of that decolonizing work, and also a fulfillment of those obligations made twenty-two years ago, but the story goes back of course even further. 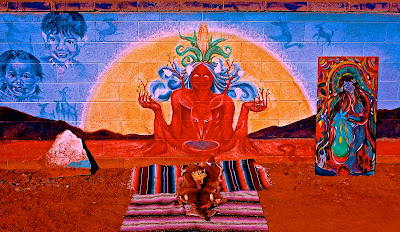 TONATIERRA of the Izkaloteca, Maya Vision of the Maya Nations, and the Techantit Cultural Center of the Nahuat Pipil Nations were the conveners of this international conference.  Among these three organizations, within our shared cultural mandates and instructions, in spite of the centuries of oppression, suppression, and repression, there continues till today the interdependence and foundation in daily practice of our ancient calendar systems and teachings of the milpa, our ways of life as People of the Corn Mother.  When we look forward from this perspective, and with these teachings, it is a vision of the past seen from the future that we become. 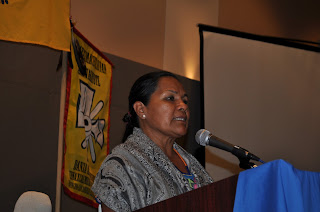 And so when Vicky Flores Flores arrived at Sky Harbor airport in Phoenix on Friday April 19th after having to sleep overnight in the airport in Mexico City because of a mix up in the connecting flight, she was just in time to make it to the afternoon session of the DISMANTLING conference and give the closing remarks at the end of the first day.   She spoke in her O’dam language, and as had occurred during each of her other prior visits to Arizona, the O’otham relatives could understand her message. 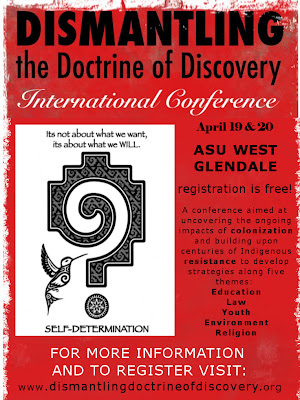 
4.            The Permanent Forum recalls the fourth preambular paragraph of the United Nations Declaration on the Rights of Indigenous Peoples, which affirms that all doctrines, policies and practices based on or advocating superiority of peoples or individuals on the basis of national origin or racial, religious, ethnic or cultural differences are racist, scientifically false, legally invalid, morally condemnable and socially unjust. Legal and political justification for the dispossession of indigenous peoples from their lands, their disenfranchisement and the abrogation of their rights such as the doctrine of discovery, the doctrine of domination, “conquest”, “discovery”, terra nullius or the Regalian doctrine were adopted by colonizers throughout the world.  While these nefarious doctrines were promoted as the authority for the acquisition of the lands and territories of indigenous peoples, there were broader assumptions implicit in the doctrines, which became the basis for the assertion of authority and control over the lives of indigenous peoples and their lands, territories and resources. Indigenous peoples were constructed as “savages”, “barbarians”, “backward” and “inferior and uncivilized” by the colonizers who used such constructs to subjugate, dominate and exploit indigenous peoples and their lands, territories and resources.  The Permanent Forum calls upon States to repudiate such doctrines as the basis for denying indigenous peoples’ human rights.

9.            The Permanent Forum recommends that States include in all education curricula, in particular the school system, a discussion of the doctrine of discovery/dispossession and its contemporary manifestations, including land laws and policies of removal. 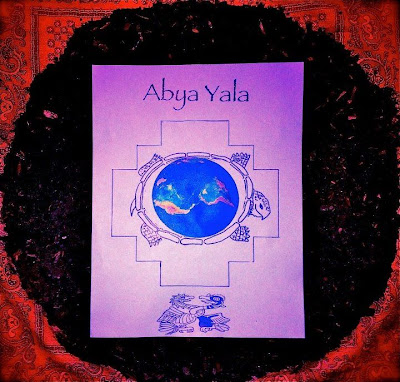 In bringing these issues forward towards implementation, nearly one hundred high school students including members of the Native American Educational Program of the Phoenix Union High School District attended the conference.  Chief Jake Edwards of the Onondaga Nation, members of the Haudensaunee - People of the Longhouse also known as the Iroquois Confederacy shared the message of Great Law of Peace with all conference attendees, which also included many non-indigenous folks.  Chief Edwards presented on the history of the confederacy, and its establishment over a thousand years ago as the oldest democracy in the continent.  He also shared the story and meaning of the Haudenosaunee Wampum Belts which document the principles of mutual respect and self-determination that must prevail between the Indigenous Nations and the non-indigenous societies of the settler states of the Americas.


Also attending the conference were delegations of Nations and Pueblos of Indigenous Peoples from the entire hemisphere, from the Lenape of the North [Canada] to the Mapuche Nation of the South [Chile].  Representatives of the Maya of Totonicapan [Guatemala] and the Nahuat Pipil [El Salvador] , the Arhuaco and Embera [Colombia] joined with Indigenous Nations of the O’otham [Arizona] and the O’dam of Mexico [Durango] and the Havasupai to receive the Continental Confederation of Indigenous Nations of Abya Yala intent on regenerating the historical and political vision of responsibility and traditional alliance that has sustained the collective cultural identity and nationhood of Indigenous Peoples for millennia.


Before returning back to Mexico, Vicky Flores Flores visited among the O’otham Nations relatives of Salt River and Gila River communities sharing language, food and the spirit of the O’otham-O’dam Himdag, for which there is no border on the land or in time which cannot be overcome with patience, hard work, and a lot of love.


This story is to be continued, as Vicky Flores Flores has extended and invitation to receive a delegation of the O’tham to visit her home community in Durango, Mexico. Plans are still in the making, but she suggested that the best opportunity falls in Mid- May when the O’dam ceremonies are in full swing.  Keep posted.


Link:
The O'dam of Durango, Mexico 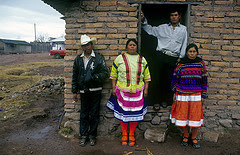 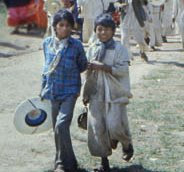 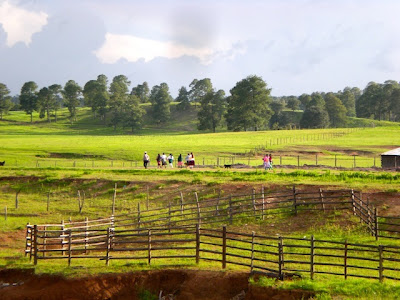 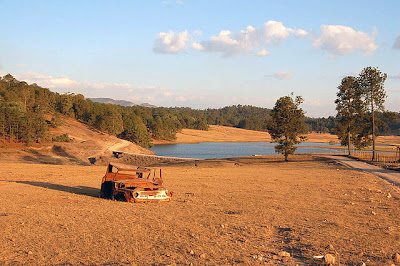 Posted by chantlaca at 11:52 PM No comments:

The Age of Abya Yala